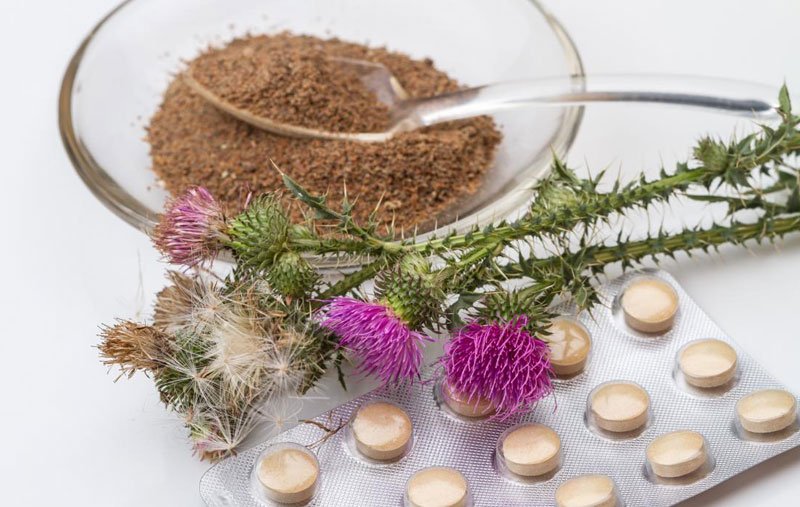 Milk thistle, is a natural herb that has antioxidant and anti-inflammatory properties, and is commonly used to detoxify the body, especially the liver, as well as help liver diseases and gallbladder problems. Milk thistle (which has the scientific name Silybum marianum) grows mostly in California, although it can be grown in many parts of the world with a warm climate. In fact, milk thistle, or silymarin, is the most common natural supplement for liver disorders in the U.S. due to its many health benefits.

As an herb that’s considered a “hepatic, galactogogue, demulcent and cholagogue,” milk thistle benefits are thought to include being able to promote healthy digestive function by promoting enzyme formation, increasing bile production, decreasing inflammation and soothing the mucous membranes throughout the body.

What Is Milk Thistle?

Milk thistle has actually been used for over 2,000 years. The plant is native to the Mediterranean region and a member of the Asteraceae plant family, which also includes other plants like sunflowers and daisies. The Greek physician and botanist Dioscorides was the first to describe milk thistle’s healing properties back in the year 40 A.D.

Milk thistle gets its name from the milky-white liquid that runs off of the plant’s leaves when they’re crushed. The actual leaves of the plant also have a spotted white pattern that makes them look as if they’ve been dunked in milk.

What are the health benefits of milk thistle, aka Silybum marianum? As an antioxidant, milk thistle benefits are similar to other healing nutrients, like vitamin E or vitamin C, which help fight free radical damage and slow the aging process that can lead to disease development. It specifically contains high levels of lipophilic extracts from the seeds of the plant, which act as bioflavanoid antioxidants that increase immunity and slow down oxidative stress.

Milk thistle benefits work by drawing toxins out of the body and protecting the liver from damage. Silymarin, which is a flavonoid derived from the milk thistle plant, has been used in traditional medicine as a natural remedy for diseases of the liver because of its potent antioxidant activity.

What do you take milk thistle for? While there are many different milk thistle benefits, it is most well-known for being a natural liver supporter and detoxifier and is sometimes used to help treat liver diseases such as cirrhosis, jaundice and hepatitis, as well as gallbladder problems. The liver constantly works hard to help defend us from toxins that are common in our everyday life, acting like a filter and removing harmful substances from the body. Milk thistle benefits have been shown to include decreasing, or even reversing, damage to the liver that’s been caused by prescription medications, alcohol use, antibiotics, pollution, heavy metals and so on.

There are a variety of milk thistle products available. The seeds and leaves of the milk thistle plant can be consumed either in pill, powder, tincture, extract or tea form. The seeds can actually be eaten completely raw, too, but usually people prefer to take a milk thistle extract or supplement in order to consume a higher dose and see bigger results.

As a liver support and liver aid, milk thistle is a powerful liver cleanser. It helps rebuild liver cells and remedy liver damage while removing toxins from the body that are processed through the liver. Milk thistle is effective at naturally reversing toxicity in the body, including the harmful effects of alcohol consumption, pesticides in our food supply, heavy metals in our water supply, pollution in the air that we breathe and even poisons.

The liver is actually our largest internal organ and is responsible for performing a number of essential detoxifying functions. The condition of our blood throughout our whole body is mostly reliant on the health of our liver. As a “blood purifier,” the liver needs to actively clean the blood each and every day in order to support nearly every system within our body.

The liver helps remove toxicity and harmful substances from our blood, aids in hormone production, detoxifies the body, releases glucose into the bloodstream in order to give our body steady energy and releases bile into our small intestine so fat can be absorbed from foods. You can see why liver problems and poor liver function can create so many problems!

Milk thistle has been historically used for various liver diseases, including:

2. May Help Protect Against Cancer

Milk thistle seeds are a high source of the antioxidant flavonoid called silymarin, which is actually composed of several other active compounds known as flavolignans. Silymarin is associated with decreasing the risk for cancer development by boosting the immune system, fighting DNA damage and reversing cancerous tumor growth.

In 2007, after reviewing numerous studies involving milk thistle therapeutic treatments, researchers at the University of Minnesota found that:

There is strong preclinical evidence for silymarin’s hepatoprotective and anticarcinogenic effects, including inhibition of cancer cell growth in human prostate, skin, breast, and cervical cells.

About 50 percent to 70 percent of the silymarin molecules present within milk thistle are the type called silybin, also known as silibinin. This antioxidant stimulates protein synthesis and changes the outside layer of healthy cells, keeping them protected from damage and mutation. It inhibits toxins from dwelling in the body; helps with cell renewal; and counteracts the harmful effects of pollutants, chemicals and heavy metals that can cause “free radical damage.”

Silymarin acts as a cancer protector because it’s “a toxin blockade agent” and inhibits the binding of toxins to the cell membrane receptors, according to researchers at the University Magna Graecia Department of Experimental and Clinical Medicine.

Something important to keep in mind, however, is that existing studies on possible heart benefits of milk thistle have only been done involving people with diabetes, who tend to have high cholesterol levels. So at this time, it’s unclear if milk thistle has the same effects in people without diabetes and if it will be used to naturally lower cholesterol levels in the future.

4. May Help Control or Prevent Diabetes

According to the National Institute of Health, there’s some compelling research showing that taking silymarin, the main chemical found in milk thistle, along with conventional treatments, can help control symptoms of diabetes by helping with glycemic control. The valuable effect of antioxidants found in milk thistle has been reported in experimental and clinical studies to help decrease blood sugar levels in insulin-resistant patients.

One 2006 study conducted by the Department of Pharmacology at the Institute of Medicinal Plants found that when diabetic patients were given silymarin extract over a four-month period, their fasting blood glucose and insulin levels improved significantly compared to patients receiving a placebo.

This is likely true because the liver is partly responsible for regulating hormones, including the release of insulin into the bloodstream. Insulin is responsible for managing blood glucose (sugar) levels in the blood, which is especially important for those with diabetes.

The liver is a major digestive organ, helping process nutrients and toxins that enter our body through foods, water and air. Because the liver and other digestive organs — like the gallbladder, pancreas, intestines and kidneys — work closely together to improve liver health, milk thistle is also able to help prevent gallstones and kidney stones.

Although the research on this topic is limited, because of milk thistle’s ability to increase bile flow and aid the liver and gallbladder in detoxification, it may be useful in the prevention of gallstones. Gallstones are formed when cholesterol and other matter within your bile bind together. This is problematic because they can become more solid and become lodged in the inner lining of your gallbladder.

Because milk thistle’s antioxidants help prevent free radical damage throughout the body and remove pollutants and waste from the blood and digestive tract, the herb may actually help slow the aging process. This applies to both the surface of your skin and your organs, as antioxidants can protect your body from chronic disease.

Milk thistle’s protective qualities of the skin may make it great for reducing visible signs of aging, so consuming milk thistle may be an easy way to prevent skin cancer and skin damage, such as acne, dark spots, wrinkles, lines and discoloration. Although the research on this topic is limited, an animal study published in Photochemistry and Photobiology found that silymarin protected the skin of mice that were to UV-induced oxidative stress and reduced leukocytes that promote an inflammatory response. So if you’re wondering if milk thistle is good for your skin, the answer may be yes because of its antioxidant properties.

Silymarin, the active ingredient in milk thistle, is an antioxidant that can protect against depletion of glutathione, which is a “master antioxidant” that’s extremely useful at helping prevent disease formation. Glutathione is found naturally in the human body, as well as in some plants, mushrooms, fungi and algae.

Glutathione’s biggest role is to help fight oxidative stress that leads to such diseases as cancer, diabetes, heart disease and neurodegenerative diseases.  It can help prevent damage to important cellular components caused by reactive oxygen species, such as free radicals.

One of the biggest milk thistle benefits is that it preserves glutathione, which has been suggested in lab and animal studies. The modern American diet, pollution, toxins, medications, stress, trauma, aging, infections and radiation all work to deplete liver capabilities and also glutathione in the body. Milk thistle helps increase glutathione levels by improving liver detox functions. Milk thistle strengthens the liver cell walls, buffering them from invading toxins, and supports liver regeneration and glutathione formation.

Because milk thistle is categorized as a supplement, rather than a drug, it’s not subject to the same oversight and quality control from the FDA that standard drugs are. The amount of active ingredients can vary widely depending on the different preparation methods used and the brand. Currently, there are several different milk thistle products available on the market, all recommending different doses.

How much milk thistle should you take? There is no nationally standardized milk thistle supplement dosing at this time, but most people do best consuming between 20–300 milligrams daily.

Milk thistle is generally considered safe and well-tolerated, with very few cases of side effects ever reported. The most common side effects aren’t serious and include gastrointestinal upset, such as a mild laxative effect. When taken within the recommended dose range, milk thistle is thought to be effective and mostly free of allergic reactions.

Milk thistle may interact with some medications, including allergy medicines, anti-anxiety drugs and blood thinners, among others. If you are taking any medications, speak with your health care provider before taking milk thistle.

Also note that antioxidants like those found in milk thistle have been shown to possibly interfere with the efficacy of some cancer chemotherapy drugs by protecting cancer cells from cell death.

Would you like to order your daily vitamins and supplements?